Within the context of the Global Initiative for Justice, Truth and Reconciliation (GIJTR) Kawakibi Democracy Transition Center, in collaboration with a group of international organizations working on transitional justice such as the International Coalition ofSites of Conscience (ICSC), the Public International Law & Policy Group (PILPG), the Center for the Study of Violence and Reconciliation in South Africa (CSVR) and the Forensic Anthropology Foundation in Guatemala (FAFG), organized a meeting tolaunch the second session of the TJ Academy on September,28-29 2018 at the Center’s head office.

The initiative consists of an academy thatworks on supporting activists, practitioners, academics and non-traditional actors from Tunisia, Morocco, Yemen, Libya, Iraq and Syria through capacity building and exchange workshops.

This meeting aimed to organize a second session for the Transitional Justice Academy in the Middle East and North Africa. During the meeting a discussion and an evaluation of the first sessionwas conductedin order to identify priorities of transitional justice in the region, in addition to some logistical and organizational aspects of the upcoming session. 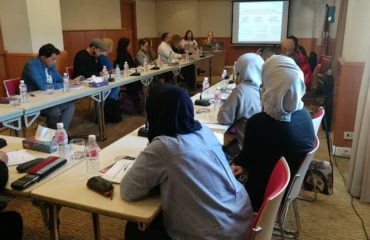